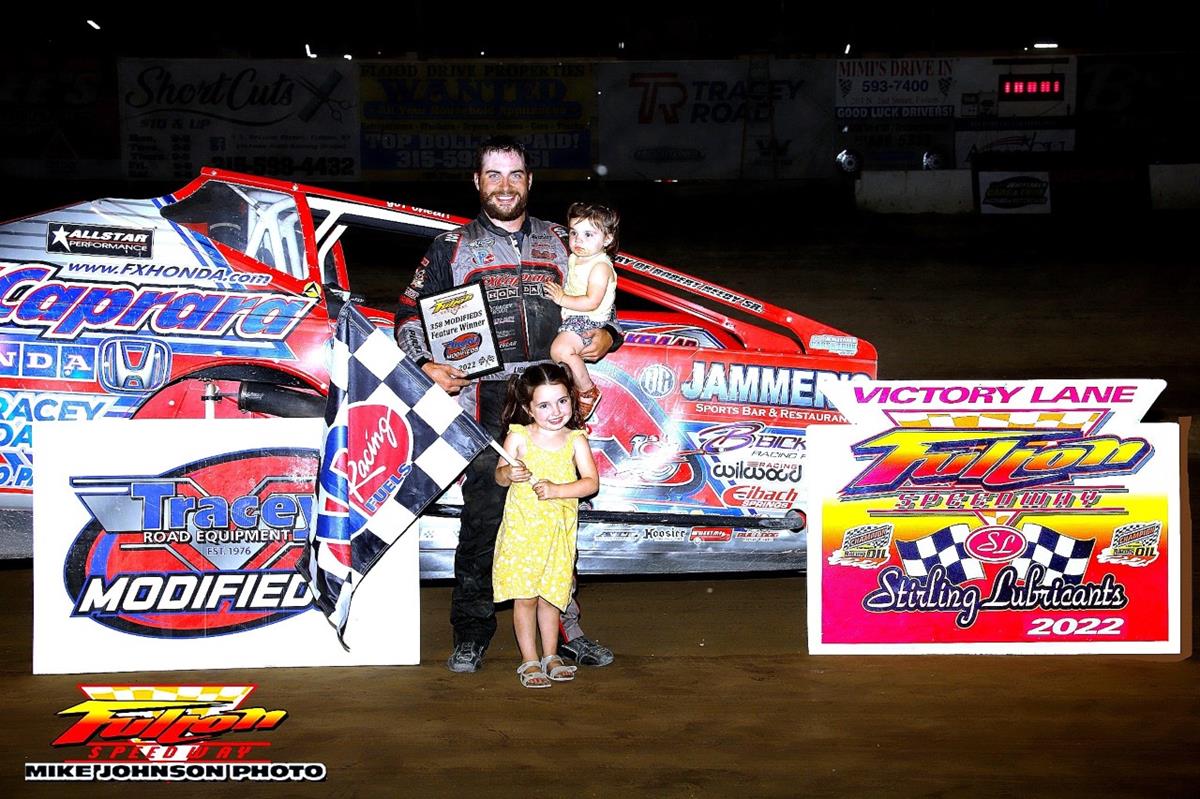 Matt Becker took advantage of a front row starting spot and would bolt out to a half a straightaway lead in the 35 lap Modified feature by lap five with Tommy Collins, Bob Henry Jr., Andrew Ferguson, and Corey Barker racing in the top-five.

A caution on lap nine would see Becker’s lead evaporate. On the restart, Becker would jump back out to a lead, still running the topside of the speedway.

With fifteen laps showing on the scoring tower, Becker still showed the way out front as the division heavy hitters made their way to the front as Dave Marcuccilli, Collins, Larry Wight, and Tim Sears Jr. raced in the top-five.

On lap twenty you could have thrown a blanket over Becker, Marcuccilli, and Wight with Wight blasting into the lead one lap later.

The caution lights would come on lap twenty-four. On the restart, points leader Sears suddenly slowed to a stop on the front straight. He would be pushed to the pits, ending his night.

Over the final laps Larry Wight had his car working no matter where he put it on the speedway and would cruise under the checkers two seconds ahead of Ron Davis III, Dave Marcuccilli, Todd Root, and Tommy Collins.

In the first 25 lap Sportsman feature, Friday night’s Brewerton Speedway winner Richard Murtaugh bolted out to a half a straightaway lead by lap five with Cody Manitta, Rocky Grosso, Kearra Backus and AJ Miller in a tight battle for second through fifth.

With ten laps showing on the scoring tower, you could have thrown a blanket over Murtaugh, Manitta, and Grosso who battled for the lead with Miller, and Teddy Clayton not far behind the top-three.

Murtaugh, Grosso, Manitta and now Miller made it a four-way battle at the front with ten laps remaining.

Grosso, who ran the entire race on the bottom groove, worked his way to the lead on lap eighteen and looked to run away from the field.

Just when it looked like Grosso was heading to victory lane, the yellow lights would come out on lap twenty-three, setting up a dash to the checkers.

Jake Davis and Quinn Wallis would bolt out to a two-car breakaway in the early going of the second 25-lap Sportsman feature, while the racing behind them was two- three- and even four-wide.

On lap ten, Davis still led as he still had Wallis hounding his back bumper lap after lap. Wade Chrisman, Jordan Millard, and Brett Sears raced in the top-five.

With ten laps remaining, Davis still led running the bottom as Wallis and Chrisman moved around on the track looking for a way by Davis, with Sears and Millard still in the mix in the top-five.

A yellow would come out on lap twenty, setting up a five-lap dash to the checkers.

Over the final laps there was no stopping Jake Davis as his comeback from a hard wreck where he was knocked out recently was complete as he won the drag race out of turn four to win by a half a car length over Quinn Wallis. Brett Sears, Wade Chrisman, and Andrew Buff completed the top-five.

The Hobby Stocks once again put on a fantastic 20-lap feature.

Edward Stevens and Jim Evans would both lead early laps before Ron Hawker made the winning pass on lap five. The win wasn’t easy as he had to hold off different drivers who challenged him for the win. Bob Buono, Casey Cunningham, Jim Evans, and Ron Marsden finished second through fifth.

Who says you need water to have a boat race? Not the Fulton Speedway. This Saturday, July 30 Billy Whittaker Cars & Trux will present the H2No boat race plus the Midway Fan Fest and racing.

Before the night’s racing, come to the speedway midway to kick off the evening for Fan Fest. Racers will bring their machines of speed from the pits, so fans can get up-close to the cars, talk to their favorite drivers, take pictures, get autographs and driver giveaways.

After the feature racing, get ready for the chaos, carnage and mayhem of the boat race. No trailer is needed as the boats will be tethered to a vehicle with steel cables in a last boat intact free-for-all winner is declared.