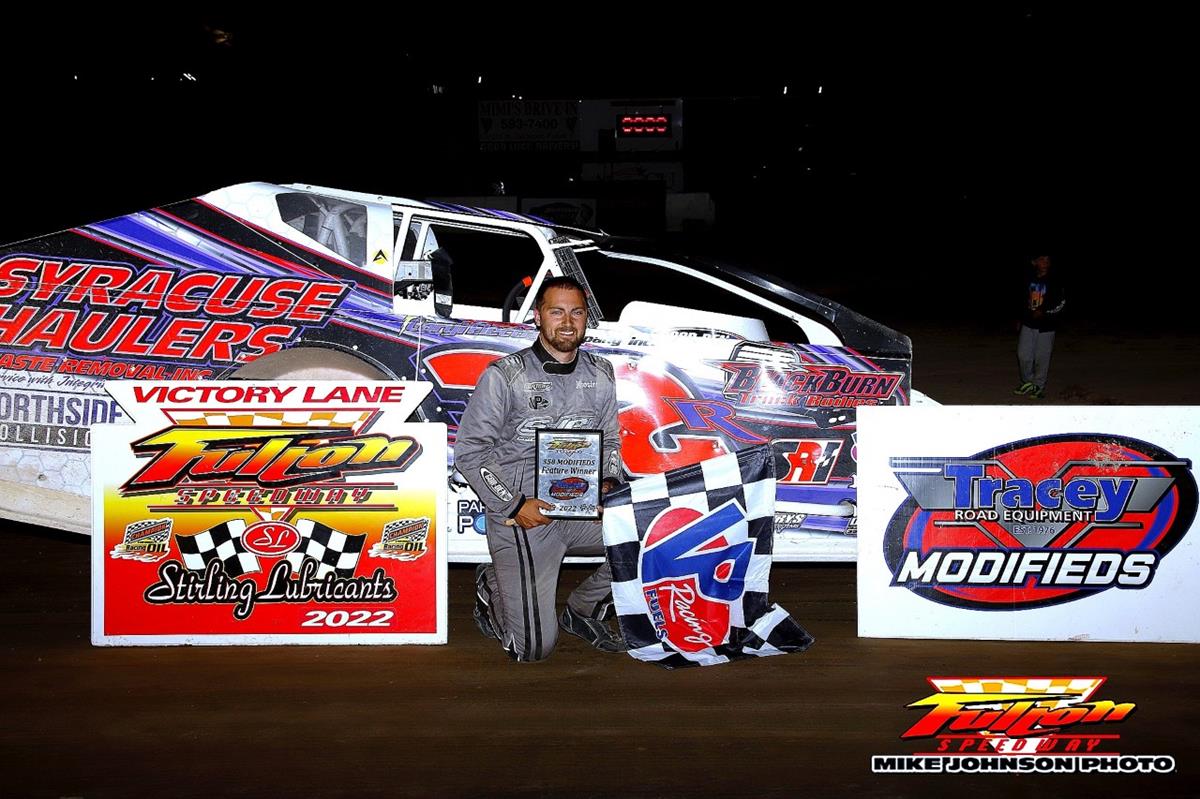 FULTON, NY – (July 9, 2022) – If there was a photo next to the word domination, Ron Davis III photo would be used after his Modified feature win Saturday night at the Fulton Speedway.

The 35-lap Tracey Road Equipment DIRTcar Modified feature would see Davis take the lead on lap four and from there would open a half a track lead with only eight cars finishing on the lead lap in the caution race.

Ryan Richardson would lead the opening lap of the Modified feature by inches over Bob Henry Jr while on lap four, Ron Davis III was hammer down on the cushion driving into the lead.

With ten laps showing on the scoring tower, Davis would drive out to a full straightaway lead, leaving Richardson, Andrew Ferguson, Henry, and Colton Wilson to race for second through fifth.

Davis kept getting faster, leading by a half a track on lap twenty. Second in points, Dave Marcuccilli, Richardson, Ferguson, and Todd Root showed on the scoring tower.

With ten laps to go, scoring and timing showed Davis with a 7.7 second lead while still rapidly putting cars down a lap. Marcuccilli, Larry Wight from thirteenth, point leader Tim Sears Jr., and Richardson were still heading to top-five finishes.

Because of the large car count, here were a pair of 25-lap DOT Foods DIRTcar Sportsman features.

In the first feature Richard Murtaugh would grab the lead at the start and by lap five opened a half a straightaway lead as Wade Chrisman, Clayton Brewer, Chris Mackey, and Kyle Devendorf raced hard for second through fifth.

A caution on lap eleven erased Murtaugh’s big lead. Chrisman took advantage of the yellow as he would drive into the lead on the restart.

With ten laps to go Chrisman was still out front as Devendorf moved into second and set his sights on the leader.

Over the final laps Kyle Devendorf threw everything he had at Wade Chrisman, but Chrisman ran a perfect line around the speedway, picking up the win. Chris Mackey, Andrew Buff, and Clayton Brewer completed the top-five.

Sportsman feature number two, Tim Gareau would lead the opening four laps when AJ Miller went to the high side and drove into the top-spot.

A yellow on lap nine would tighten the field up for the restart. The top-five on the scoring tower were AJ Miller, Ryan Dolbear, Jordan Millard, Emmett Waldron, and Remington Hamm.

Hamm would take advantage of a lap eleven caution, taking the lead on the restart.

Over the final laps, Ryan Dolbear threw everything he had at Remington Hamm, but Hamm hit his marks and would drive to victory lane. AJ Miller, Tyler Murray from twentieth, and Jordan Millard completed the top-five.

Brennan Fitzgibbons would lead the first seven laps of the Hobby Stock feature when the yellow came out. On the restart, John Pietrowicz drove into the lead.

Pietrowicz would dominate the rest of the way for his first win of the season. Brennan Fitzgibbons, Casey Cunningham, Jim Evans, and Adam Hunt finished second through fifth.

Discounted General admission tickets are $25 online now but will increase to $30 at the gate. Kids age 3-12 are just $10 in advance and $15 at the gate, while ages 2 and younger are Free. Come early and join the Fun Zone Track party – just $5 per person but you can do it for free with a special discount card available from an area McDonald’s® Restaurant. Purchase a ride experience on the Renegade Ride Truck for just $15. A limited number of Special VIPs all access passes available for $55, includes special inside lot parking, event admission, Fun Zone Pit party pass, special viewing area and all the food and beverage your family will need.

Advance sale tickets are available now at www.fultonspeedway.com. Tickets will also be available at the box office on the day of the show.

On Friday, July 15 gates will open at 5pm. The Fun Zone & Track Party and the Monster Ride experience will run from 5-6:30 PM. Monster Truck Engines will fire at 7:00 PM. Saturday’s show times are two hours earlier, with gates opening at 3pm, Fun Zone and Track party and the Monster Ride Experience running from 3-4:30pm. The main show will kick off at 5pm. The gates will open a half hour earlier each day for VIP Pass holders.