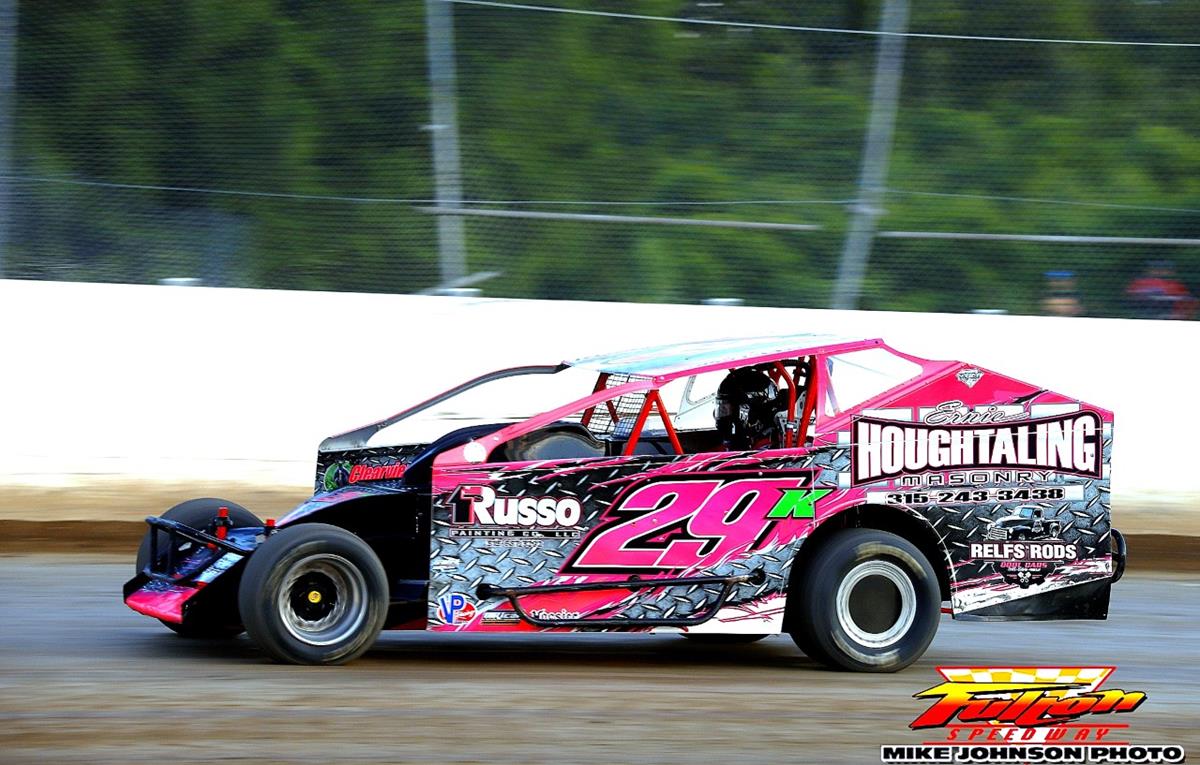 FULTON, NY – (July 2, 2022) – One of the most popular victories this season with fans when a driver drove under the checkered flag happened Saturday night at the Fulton Speedway when Chris Cunningham from Kirkville, NY won his first ever Tracey Road Equipment DIRTcar Modified 35-lap feature.

Cunningham would lead wire-to-wire in the 35-lap feature, navigating lapped traffic late plus holding off a fast-closing Tim Sears Jr.

Chris Cunningham would take advantage of an up-front starting spot and would drive out to a ten car length advantage by lap ten over Corey Barker, Jeff Taylor and Justin Crisafulli, with Todd Root and Tim Sears Jr. slowly reeling in the top-three.

At the halfway point and no yellows to slow the pace, Cunningham was on rails on the bottom of the speedway while Barker, Taylor, Crisafulli, and Sears still raced in the top-five.

With ten laps remaining, Cunningham could see the laps clicking off the lap counter as he was closing in on his first ever modified victory. Barker, Taylor, Sears, and Crisafulli were still in the hunt.

With five laps to go, Sears moved into second and set his sights on Cunningham as he was looking for his fifth win of the year at the speedway.

Over those final laps, Chris Cunningham didn’t flinch as he hit his marks in traffic and beat Tim Sears Jr. for his first career Tracey Road Equipment DIRTcar Modified win by 0.548 at the checkers. Corey Barker, Todd Root, and Jeff Taylor finished third through fifth.

There were a pair of 25-lap Sportsman features raced Saturday night.

In the first feature Tim Gareau would lead the opening two laps when he would get shoved into an infield tire exiting turn two, ending his night. Track officials would put Brett Draper to the back of the field for the contact.

Richard Murtaugh and Chris Mackey by lap five were in a two-car breakaway for the lead as Cody Manitta, Clayton Brewer, and Alan Fink raced in a tight pack for third through fifth.

With ten laps showing on the scoring tower, Murtaugh, Mackey, and Fink made it a three-way battle for the top spot. Tyler Corcoran and Manitta raced for fourth and fifth.

After hounding Murtaugh for a number of laps, Fink would grab the lead by inches at the line with ten laps remaining. Corcoran, Mackey, and Brett Sears were still in contention.

Over the final laps, Alan Fink would hold off Tyler Corcoran for the win. Brett Sears, Chris Mackey, and Jordan Millard completed the top-five.

In the second 25-lap feature James Donaldson would grab the lead at the drop of the green and by lap five held a slim lead over Robert Gage, Kearra Backus, Andrew Buff, and Quinn Wallis.

By lap ten the intensity got turned up as you could have thrown a blanket over Donaldson, Gage, Amy Holland, and Buff, with AJ Miller just a couple car lengths back.

With ten laps remaining the intensity was turned up even more as Donaldson, Holland, Buff, Gage, and Miller ran within inches of each other in the battle of the night for a win.

On lap seventeen, Buff went to the topside of the speedway to drive into the lead as the final laps started clicking off the scoring tower.

A yellow on lap twenty-three slowed the exciting fight for the lead and set up a green, white, checkers finish.

When the race went back to green, Andrew Buff drove away for the win. James Donaldson, who was racing in Novice earlier this season, finished second. Amy Holland, AJ Miller, and Robert Gage finished third through fifth.

Brandon Barron led the opening four laps of the 20-lap Hobby Stock feature before Jim Evans, who started sixth, took over the lead. On lap eight Casey Cunningham, who watched his dad win the Modified feature, made the winning pass and never looked back, joining dad as a feature winner on the same night. Bob Buono, Ron Marsden, Jim Evans and Adam Hunt completed the top-five.

The 15-lap Novice Sportsman feature saw Danny Allen lead the opening four laps before Skylar Greenfield took over the lead. Greenfield would lead the rest of the way but had to hold off Jason Parkhurst Jr. for the win.

The finale of the Lucas Oil Empire Super Sprints Speedweek raced a 25-lap feature, and the winner Davie Franek took care of business as he also won the ESS Speedweek Championship.

Shawn Donath would lead the opening nine laps before Franek went to the extreme topside of the speedway to blast into the lead.

With ten laps to go Franek was in his own zip code running up against the wall while also putting cars a lap down. Donath, Jordan Poirier, Dylan Swiernik, and Jason Barney battled for the top-five.

This coming Saturday, July 9 Ryan Phelps Auto Sales will present one of the fans' favorite nights during the race season with Family Autograph Night. During intermission, fans of all ages can come down track-side and get up close to all the cars, meet their favorite drivers for pictures, autographs, hero cards and other giveaways.