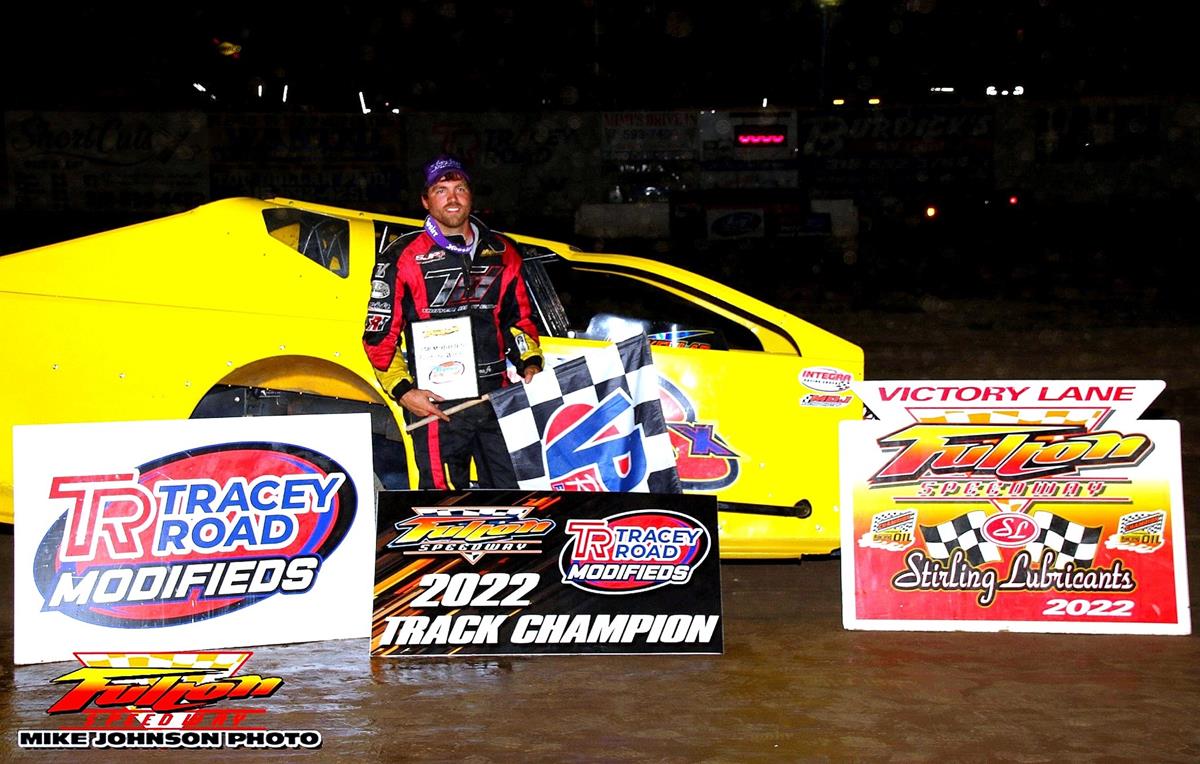 Tim Sears Jr. Cruises To Fulton Speedway Win and With It the Track Championship

FULTON, NY – (September 3, 2021) – Tim Sears Jr. made the decision to skip the Lebanon Valley Super DIRTcar Series event to run for the Fulton Speedway track championship. That decision paid off as he won his eighth Tracey Road DIRTcar Modified feature and the 2022 title on DOT Foods and Neivel Precision Plumbing night.

Sears came into the final point night sixteen points ahead of defending track champion Ronnie Davis III, and thirty-three ahead of Dave Marcuccilli, setting the stage for the 35-Lap feature on the final weekly racing event of the 2022 season.

Sears started the feature in eighteenth and would quickly work his way to the front, taking the lead on a lap eighteen caution and restart. Once out front, nobody seriously challenged Sears the rest of the way as he celebrated in victory lane with family and friends from his win and track championship.

Sean Beardsley would grab the lead at the start of the 35-Lap Modified feature and would stretch it out to a full straightaway lead by lap five as Colton Wilson, Corey Barker, Todd Root, and Dave Marcuccilli raced for second through fifth.

On lap ten you could have thrown a blanket over the top-three of Beardsley, Wilson, and Root, as Tim Sears Jr. was coming fast to the front from eighteenth and Corey Barker was fith.

Lap thirteen would see Root shot out of a cannon as he drove to the lead with Sears in tow. The pair would run side by side for a few laps, when a caution on lap eighteen slowed the pace.

On the restart, Sears would drive into the lead with the winning pass. Once out-front, Tim Sears Jr. wasn’t seriously challenged the rest of the way for his eighth win of the season and track title. Larry Wight, Ronnie Davis III, Dave Marcuccilli, and Todd Root completed the top-five.

The first 25-Lap Sportsman feature saw Dave Moyer and Stephen Marshall swap the lead back and forth and would be in a four-car breakaway at the front with Cody Manitta, and Richard Murtaugh by lap five.

Marshall would battle back, retaking the lead on lap nine and would be in a three-car battle at the front with Moyer and Manitta with Murtaugh, and Emmett Waldron still in contention.

With ten laps to go Marshall held a ten-car length advantage with Moyer, Manitta, Waldron, and Murtaugh still in the top-five.

Marshall and Moyer were racing side by side for the lead until lap 23 when the race completely changed when the two got together with their race ending in turn three with damaged cars.

The second 25-Lap feature would not only be for the win, but for the track championship between Andrew Buff who would start twelfth, and Chris Mackey sixth.

Clayton Brewer III would grab the lead at the start of the second 25-Lap feature as the caution would wave on lap two with a multi-car tangle in turns one and two. One of them involved was point leader Andrew Buff, who had nowhere to go. His car was able to continue from the back of the field.

Brewer would lead Chris Mackey by ten car lengths by lap five, with Dorian Wahdan, Rocky Grosso, and Jimmy Moyer racing for position in the top-five.

Brewer and Mackey were racing side by side for the lead on lap ten, with Wade Chrisman, Wahdan, and Moyer still in contention.

Mackey found the power he needed on lap twelve to drive by Brewer and into the lead.

Once out-front Mackey’s lead grew until lap twenty-three when the yellow came when Brewer slowed, ending his shot for a possible win.

Thirty-one Lucas Oil Empire Super Sprints signed in to the pit area Saturday night for a 25-Lap feature that would come down to the last lap, last corner pass for the win.

Jason Barney would take the lead at the green flag as he looked to run away early in the 25-Lap feature, while the racing behind him was two and three-wide throughout the field.

On lap six, Larry Wight moved into second and took off after Barney. After he caught and hounded Barney for the lead, Wight would drive into the top spot on lap thirteen.

Just when it looked Wight might cruise to the win, Davie Franek caught Wight as the two battled in heavy traffic, with Franek taking the lead on lap twenty-one.

Still racing in heavy traffic, the race came down to the final lap and final corner. Larry Wight threw a big slide job on Davie Franek in three and four, winning by a narrow 0.295 of a second at the checkers. Jonathan Preston, Jason Barney, and Paulie Colagiovanni completed the top-five.

Almost every week, the Hobby Stocks put on features that came down to the final lap to decide the winner. Saturday night was no different.

Over the entire second half of the 20-Lap feature, Bob Buono and John Pietrowicz battled door handle to door handle lap after lap. On lap seventeen, Pietrowicz took advantage of a lap car that slowed Buono up and allowed Pietrowicz to drive by and pick up his second win of the year. Ron Hawker, Jim Evans, and Brennan Fitzgibbons rounded out the top-five.

Ron Hawker, who said his car sat in his trailer for ten years until this season, is the 2022 Billy Whittaker Cars & Trux Hobby Stock Track Champion.

Danny Allen led every lap of the 15-Lap E&V Energy Novice feature to close out the race night. Mod Lite racer Kyle Demo finished second, with Joe Wilcox, Rick Kinney, and Phil Loosen to round out the top-five.

The speedway will be silent until Tuesday, September 20th for the final Test-and-Tune before the Outlaw 200 Weekend. Pits will open at 5:00 pm, with cars on track at 6:00 pm.

Tickets for the prestigious 36th Annual Outlaw 200 Weekend are for sale. To get yours and for everything Outlaw 200 weekend is available by going to www.fultonspeedway.com. Once there, click on the Outlaw 200 tab at the top of the page.