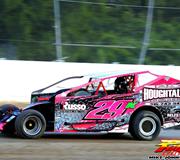 7/3/2022
FULTON, NY – (July 2, 2022) – One of the most popular victories this season with fans when a driver drove under the checkered flag happened Saturday night at the Fulton Speedway when Chris Cunningham from Kirkville, NY won his first ever Tracey Road Equipment DIRTcar...more 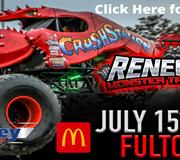 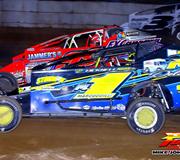 6/28/2022
FULTON, NY – (June 29, 2022) – Spend part of your American Independence weekend celebrations at the Fulton Speedway for grandstand shaking, big horsepower, high speed racing action, plus a chance to help our animal friends with a silent auction this Saturday, July 2 at the...more

Marcuccili played the patient game in the 35-lap feature, making the winning pass on lap thirty-three when he drove around race-long leader Justin Crisafulli.

The bounty on Tim Sears Jr. was not claimed as he had mechanical problems early in the feature.

Ryan Richardson and Justin Crisafulli brought the 35-lap Modified feature down to the green, with Crisafulli grabbing the early advantage.

The caution lights would come on lap two when Larry Wight stopped in turns three and four with rear suspension problems. Repairs couldn’t be made, ending his night.

The caution would slow the field on lap six when Tim Sears Jr. slowed with rear end mechanical issues, ending his night like Wight’s.

Crisafulli would drive out to a two-second lead when the lap counter read lap fifteen. Barker, Davis, Richardson and Hurd still showed in the top-five.

On lap nineteen, Crisafulli would see his big lead evaporate when Hurd slowed to bring out the yellow.

Davis would go to the topside of the speedway to drive into the lead on lap twenty-seven.

With five laps to go, Crisafulli drove back under Davis to retake the lead just before Davis had a tire go down ending his shot at the win.

On lap thirty-three Dave Marcuccilli went to the top of the speedway to blast into the lead with the winning pass. Justin Crisafulli, Corey Barker, Todd Root, and Jeff Prentice finished second through fifth.

At the start of the 25-lap Sportsman feature, Joe Kline and Buddy Leathley got upside down on the back straight. The cars and all the safety equipment did its job as both drivers were okay.

Robert Gage would lead the opening two laps before Rocky Grosso would drive into the top-spot in the early going.

Grosso would bolt out to a half a straight lead but would see that evaporate on a lap nine caution. Quinn Wallis took advantage of the yellow and he would take over the lead on the restart.

The feature came down to a three-car race between Wallis, Grosso, and Brett Sears. Grosso would retake the lead on lap eighteen and looked to be heading to victory lane. Brett Sears had other ideas as he would drive by Grosso on lap twenty and to victory lane for his second career Sportsman win at the speedway. Quinn Wallis, Jake Davis, Amy Holland, and Chris Mackey finished second through fifth.

Once again, the Billy Whittaker Cars & Trux Hobby Stocks put on an edge of your seat 20-lap feature. Nearly the entire second half of the race Jim Evans and Bob Buono raced the entire speedway side-by-side with Buono grabbing the narrow win at the checkers. Ron Hawker, Ron Marsden, and Casey Cunningham finished third through fifth.

The speedway will return to action Saturday, June 18 when chaos and racing meet with the world-famous Trailer Race of Destruction, plus our regular divisions of racing presented by A-Verdi Storage Containers.

If you have never seen a Trailer Race of Destruction, they use the entire speedway for chaos and mayhem to destroy their opponents to be the last one standing with their trailer still attached to their vehicle to collect the $1,000-to-win top prize, plus purses for second and third place.

Any questions you might have and for marketing opportunities contact Cory Reed at (315) 593-6531 or cory@fultonspeedway.com. For all the latest news, go to www.fultonspeedway.com powered by My Race Pass and like the speedway social media pages.