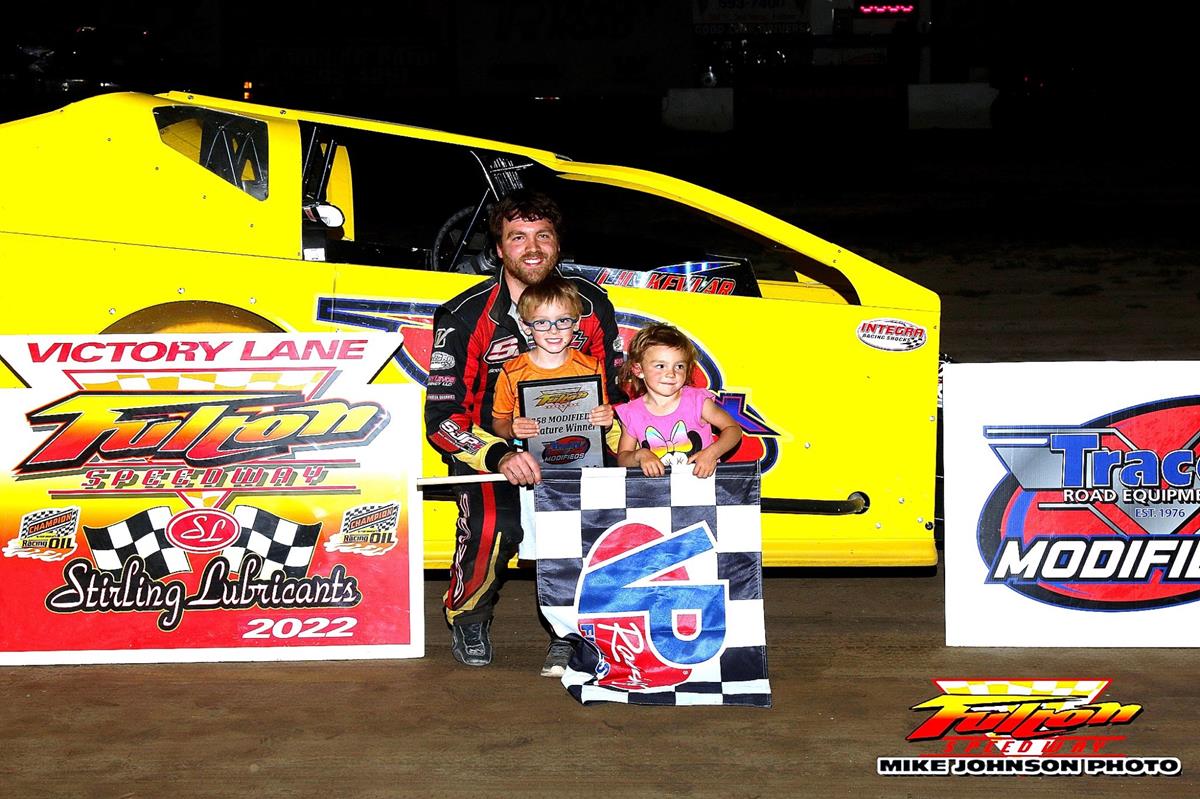 FULTON, NY - (May 14, 2022) - A big crowd, exciting side-by-side racing capped off with the crunching metal and mayhem from Demo Derbies made for a fun night for everyone in attendance Saturday at the Fulton Speedway.

Ryan Richardson and Justin Crisafulli would both lead early laps in the 35-Lap Modified feature, while racing behind them was two and three wide throughout the field.

A yellow on lap eight and restart would see Tim Sears Jr who started 15th and Larry Wight who started 16th would drive into the top-two positions.

With fifteen laps complete, Sears and Wight were in a two-car breakaway at the front of the field with track champion Ron Davis III, Dave Marcuccilli, and early leader Crisafulli raced for third through fifth.

Sears would drive away from the field by lap twenty, opening a three-second lead over Wight, Davis, Marcuccilli, and Marshall Hurd.

With ten laps to go, Sears was still in total command with Wight and Davis slugging out for second and third and Marcuccilli, and Hurd were still in the top-five.

Over the final laps, there was no stopping Tim Sears Jr. as he visited victory lane for the second week in a row. Ron Davis III, Dave Marcuccilli, Marshall Hurd, and Justin Crisafulli completed the top five.

Well over 30 Sportsman signed in to the pits, setting up two 25-Lap features.

In the first feature, Brandon Carvey would jump into the lead at the drop of the green and by lap five would be in a two car breakaway race for the lead with Matt Janczuk who started 13th.

With ten laps completed, Carvey still led and had Janczuk hounding his back bumper looking for a way by. Amy Holland, Richard Murtaugh, and Robert Gage raced for third through fifth just before a yellow slowed the action.

Matt Janczuk took advantage of the yellow and the restart as he drove by Carvey to be scored the new leader. Once in the lead, nobody seriously challenged Janczuk as he cruised to the win. Amy Holland, Brandon Carvey, Richard Murtaugh, and Kearra Backus completed the top-five.

In the second 25-Lap Sportsman feature, Brett Sears took control of the race at the drop of the green as he looked to drive away from the field.

With five laps showing on the scoring tower, Sears bolted out to a straight away lead, leaving Kevan Cook, Wade Chrisman, Chris Mackey and David Rogers to race for second through fifth just before a yellow.

Sears still led on lap ten, but had Mackey all over his back bumper waiting for any mistake. Austin Germinio, Ton Finch II, and Emmett Waldron showed in the top-five.

Sears and Mackey put on an exciting side by side race, swapping the lead back and forth, with Mackey making the winning pass on lap sixteen.

A yellow on lap seventeen and restart allowed Chris Mackey to drive away for the victory by 1.7 second over Brett Sears. Tony Finch II, Emmett Waldron, and Jake Davis finished third through fifth.

Side by side battles for the lead and throughout the field made for an exciting 15-Lap Billy Whittaker Cars & Trux Hobby Stock feature. When the checkers waved, it was Brennan Fitzgibbons in victory lane for his first Fulton win. John Pietrowicz, Adam Hunt, Bob Buono, and Todd Koegel completed the top-five.

Jason Parkhurst Jr. put on a show in the 15-Lap E&V Energy Novice feature, leading every lap for his first ever win at the speedway. Josh Fellows, Skylar Greenfield, Jason Breezee, and Brianna Murtaugh finished second through fifth.

This Saturday, May 21 long time marketing partners Regional Truck & Trailer and Ehrlich Pest Control will present the fastest and most affordable fun entertainment in Central NY.

Any questions you might have and for marketing opportunities, contact Cory Reed at (315) 593-6531 or cory@fultonspeedway.com. For all the latest news visit www.fultonspeedway.com and like the speedway Social Media pages.