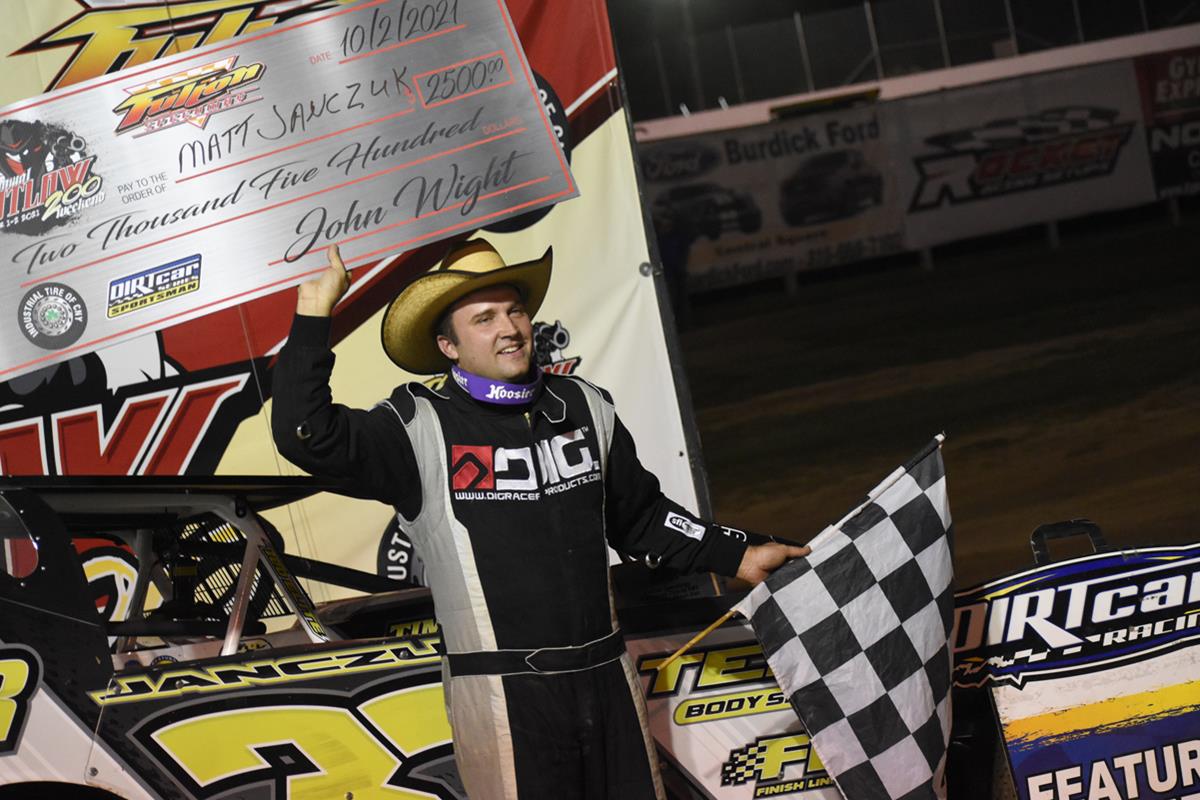 All 50 laps were action-packed with three- and four-wide racing throughout the field so it was only fitting the Feature was won in stunning fashion.

After taking the white flag, it was Janczuk on the bottom lane with Mackey, who led the most laps, in the middle, and hot shoe Sobotka on top entering Turn One. Janczuk and Mackey made contact in the tight space and that sent Mackey up into Sobotka who fell to fifth as a result. Janczuk held on for the win in the #33X.

Janczuk didn’t exactly start out the weekend running on all cylinders.

“Our TEO Pro Car was good and it was solid all night,” Janczuk said. “But (Friday) we unloaded off the trailer bad, which set us back in qualifying. We knew it was good for tonight, but we knew we had to survive the early cautions and get towards the front. We were kind of like a ping pong ball early.”

After starting 19th in the Feature by virtue of qualifying through one of Friday night’s consolation races, Janczuk steadily made his way through the pack. His fateful pass on the final lap led to a mixed reaction from the Fulton crowd in Victory Lane.

“The bottom was open and I got under Chris [Mackey] off Turn Four,” Janzcuk said. “I knew that was his weak point. I knew if I could beat him off four and into one we’d be OK. He was really struggling going into three and four. That’s where I made up the most ground on him.

“I don’t know what it looked like from the stands but I didn’t get into Chris. He actually drove over my right front. It sent him up into Sobotka. Based on the fans’ reaction it must have looked different, but Chris even acknowledged in Victory Lane that it was close racing. This is huge for our team going into Super DIRT Week.”

Mackey led nearly every lap of the race. He started on the outside pole and immediately took the lead from outside of pole-sitter Willy Decker Jr. His first challenger was Ryan Dolbear, who pressured him early, but then Brandon Carvey started chugging along the bottom and making up ground. At the halfway point Carvey got around Mackey only to lose the spot due to a caution.

Mackey led the rest of the way until the final lap.

“The car was pretty good, we worked our tails off to keep the car decent,” Carvey said. “The guys have been watching the race track change all day with me, trying to stay on top of it. I am happy with the car overall. The track went away from me all at once. I really didn’t need those cautions. But there are nights where you do need a caution. So here we are and we’ll take a second-place finish.”

Mackey plans to take the momentum from the podium finish into this week’s NAPA Super DIRT Week.

At the halfway point it looked as though Carvey in the #19 had the track figured out on the bottom side. Carvey battled inside the top five all race.

“Those cautions really hurt me,” Carvey noted of his nixed pass for the lead. “I had just rolled the bottom for the lead when the yellow came out. I think I had a little extra push on the start and Mackey got me. The yellows kept hurting me. The longer we ran the better I could roll the bottom.”

“We were here a month ago and went from 14th to second and if we had another half a lap I would have won it rolling the bottom. That’s what we tried tonight.”

Carvey was in the catbird’s seat waiting for the top three to collect each other going for the win.

“Coming to the white flag I saw them going three-wide for the lead so I knew I just had to get to the bottom,” said Carvey. “I really didn’t think they were coming out of Turn Two in a straight line. I figured I might be able to stay on the bottom and come out on top but we’ll take third.”

The podium finish was an extremely proud moment for Carvey.

“We struggled to make this Outlaw Weekend race for a long time. We made it once before and we made it again this year through the Heat Race. Just making it was huge for our team.”

NEXT: The Fall Championship continues for the DIRTcar Sportsman Modified Series on Wednesday, October 6 at Weedsport Speedway for the NAPA Super DIRT Week Kickoff. Get your tickets now or watch live on DIRTVision.