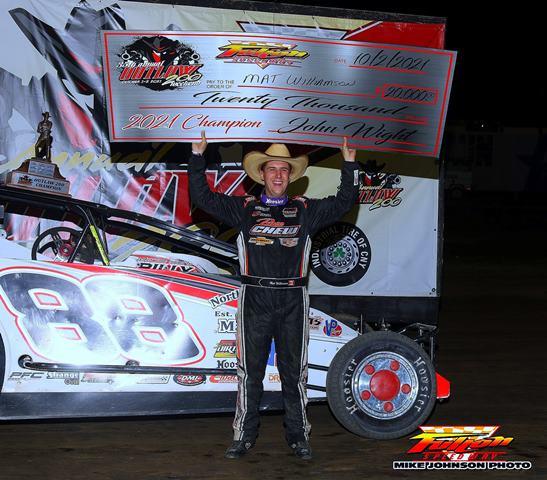 FULTON, NY (October 2, 2021) â€“Â â€˜Moneyâ€™ Mat Williamson lived up to his nickname Saturday night at the Fulton Speedway as he rode out of town $20,000 richer after winning his first Outlaw 200, plus becoming the first Canadian to win one of the most prestigious races in the Northeast.

Williamson would make the winning pass on lap 177 getting by Tim Sears Jr. and then would drive away from the field and then a roof top celebration with his car owner, who drove up from Long Island, and his crew.

Williamson, in victory lane, praised his crew, who keep digging in a season that hasnâ€™t been up to their standards.

â€œWe got ourselves deep in the field early on,â€? said Williamson.Â  â€œWe were good the first 100.Â  I didnâ€™t know what to change,â€™ at the lap 100 break. â€œWe got a good restart there.Â  I didnâ€™t know if I was going to catch Timmer (Sears) or not, it was going to be a good race either way.Â  Hats off to those guys finishing second.Â  We needed this.Â  Weâ€™ve struggled this year.Â  Now is the time to start clicking because there is money is coming up.â€?

Sears finished second and led a huge portion of the race. At one point he bolted out to a half a track lead that AMB scoring showed the lead at 8 seconds at one point.

â€œWe were really good,â€? commented Sears.Â  â€œMat was just a little better at the end.Â  We just kind of sealed the tire over,â€? Talking about a late restart. â€œWe werenâ€™t that good when went back to green.Â  We were there.â€?

Sears finished up by relating in the big picture heâ€™s happy with his Troyer car heading into Super DIRT Week at Oswego Speedway next week.

Matt Sheppard raced near the front the entire race finishing a strong third coming across the line at the checkers inches behind Sears.

â€œWe had a pretty good car tonight, couldnâ€™t steer at all in the first 100 made some adjustments, we were a little better, just not good enough to be parked over there,â€? victory lane, Sheppard said.

Jimmy Phelps was given the Hoosier Tire Hard Luck. Phelps was impressive starting 40thÂ in the 46-car starting field and would take the lead on a lap 83 restart staying out front to the lap 100 halfway break. On lap 121 and still in contention for the win, a lap car got hard into Phelps exiting turn four. The contact damaged Phelps' front end. The car wasnâ€™t the same rocket ship he had prior to the incident.

Larry Wight had an impressive run finishing fourth after having a flat right rear early in the race restarting 46th. Wight would race for the lead late in the race but settled for a top-five.

Tim Fuller was strong racing the front the entire 200-laps finishing 5thÂ at the checkers.

Hats off to Eric Fink and his track crew, as the surface they prepared provided racing and passing on the bottom, middle and top of the speedway.