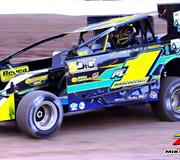 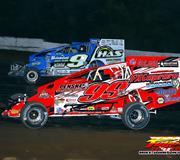 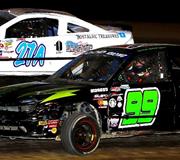 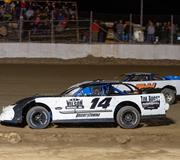 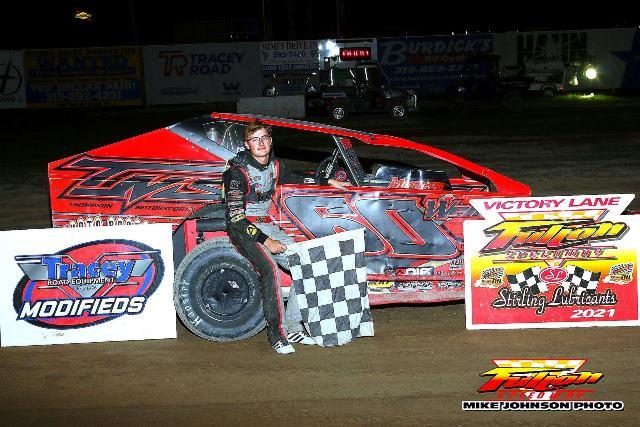 Marshall Hurd and AJ Kingsley would lead the opening 2 laps of the 35-lap Modified feature before Dylan Zacharias pulled a three-wide pass off turn four to take the lead on lap 4.

Ron Davis III who was looking for his first Modified track title was on a mission after starting 14thÂ he was in the top-five by lap 10.

With 15 laps showing on the scoring tower, Zacharias bolted out to a half a straightaway lead with Jackson Gill, Kingsley, Davis, and Chris Cunningham battling for second through fifth.

Zacharias still led at lap 20 but had company on his back bumper as Gill reeled in the leader. Just 2 laps later Gill would drive into the lead exiting turn four.

With 10 go Gill was on rails out front while putting cars down a lap. Behind Gill, Zacharias, Davis, Rocky Warner who started 19thÂ and Kingsley showed in the top-five.

The first 25-lap Sportsman feature saw Dorian Wahdan grab the lead at the drop of the green and by lap 5 held five-car lengths lead while you could have thrown a blanket over Brett Sears and Emmett Waldron with Richie Riggs and Brett Draper in the top-five.

By lap 10 Wahdan still showed the way out front, but he now had Sears all over his back bumper. On lap 13 Sears went to the topside of the speedway to drive by Wahdan into the lead.

Brett Sears in only his fifth race since moving up from Novice Sportsman was not going to be denied his first Sportsman win as he drove like a racing veteran winning by 2.4 seconds over Dorian Wahdan. Emmett Waldron, Tyler Corcoran, and Josh Amodio completed the top-five.

The second 25-lap Sportsman feature saw Matt Kitts lead the opening 2 laps before Joe Kline took over the top spot and would bolt out to a half a straightaway lead by lap 5 leaving AJ Miller, Ryan Dolbear, Kitts and Jeff Prentice to race for second through fifth.

As the race progressed, Kline would put distance between himself and Dolbear until lapped traffic hit. Dolbear would take advantage and run down and pass Kline on lap 18 to be scored the new leader.

Just when it looked like Dolbear was heading for his second win of the year, disaster struck on lap 21. In turn four Dolbear was under a car to put him a lap down when a car turned into him, ending his shot at the win.

Chris Mackey, who was second in points coming into the night, took over the lead when the race went back green and led the rest of the way for his third win of the season. Joe Kline, AJ Miller, Cody Manitta, and Jeff Prentice completed the top-five.

This season 107 Sportsman drivers competed at the speedway. Matt Janczuk now stands on top of the mountain as the 2021 DOT Foods DIRTcar Sportsman Track Champion.

Chad Homan put an exclamation point on his strong season at the speedway cruising to the win after taking the lead on lap 5 of the 20-lap Billy Whittaker Cars & Trux RUSH Late Model feature. It was his 8thÂ win of the season and back-to-back Track Championships (2019-2021) for Homan.

Two of the best to ever race in the Lucas Oil Empire Super Sprints, Chuck Hebing and Jason Barney put on a show in the 25-lap ESS feature swapping the lead back and forth numerous times. In the end Barney was fist under the checkers. Hebing, Shawn Donath, Paulie Colagiovanni, and Tyler Cartier completed the top-five.

Josh Fellows got a late start this season in the E&V Energy Novice Sportsman, but you wouldnâ€™t know it Saturday night as he dominated from start to finish for his first win. Â Savannah Laflair, Mikey Wight, Buddy Leathley, and Scott Kline finished second through fifth.

All eyes now turn to one the most prestigious racing events in the Northeast, the 35th Annual Outlaw 200 Weekend Friday & Saturday, October 1&2. Tickets for the huge weekend are now available by going to www.fultonspeedway.com. Once there click on the Outlaw 200 tab at the top of the page.

Any questions you might have contact Cory Reed at cory@fultonspeedway.com or (315) 593-6531. Keep your eye on the speedway website and Social Media pages for frequent updates about the 35th Annual Outlaw 200 Weekend.