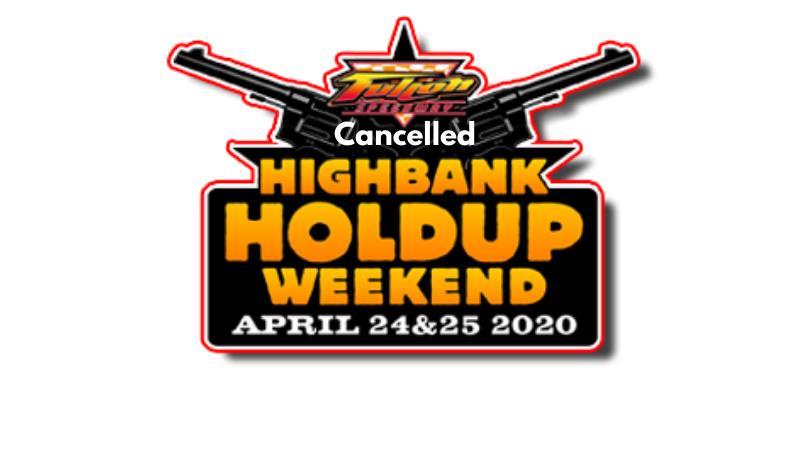 FULTON, NY â€“ With continuing guidelines set forth by government officials regarding the COVID-19 situation, the Fulton Speedway will cancel its annual opening Highbank Holdup Weekend to be held on April 24 & 25.

â€œItâ€™s unfortunate that we do have to cancel the weekend, we were waiting a bit just hoping something would change for the better and give the fans a weekend of racing,â€? noted Fulton General Manager Cory Reed, â€œHowever, the safety of our fans, employees and the competitors comes first. Iâ€™m confident we eventually hold races but we also want to make sure itâ€™s safe for all to attend.â€?

The weekend was filled with the St. Lawrence Radiology Highbank Holdup 60 for the DIRTcar 358-Modified Series and DIRTcar Central Region Sportsman Series events, the Empire Super Sprints presented by Tim Grevelding Snap-On Tools and Fultonâ€™s own Billy Whittaker Cars & Trux Late Models. â€œI talked to Dean (Reynolds) quite a bit over the last few weeks. While we had our fingers crossed and just hope something would break it was the best decision by far,â€? Reed went on, â€œWith this being a weekend event and with the uncertainty of when we all will be racing, we will just cancel. When we get back all the tracks will want to open up and run, we just donâ€™t want to interfere with weekly scheduling.â€?

All events are on hold during NYS Pause. We just encourage everyone to watch our social media for when these restrictions are lifted.