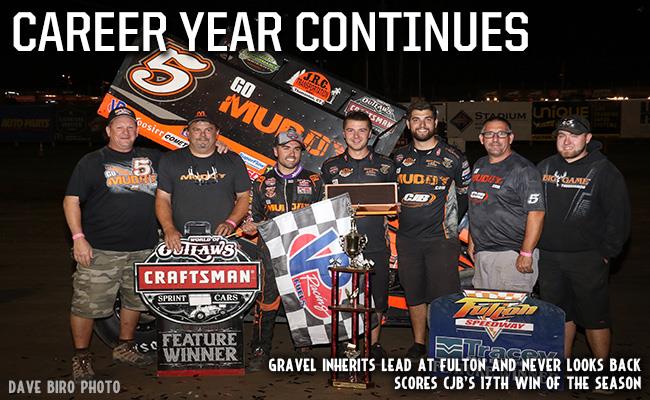 David Gravel inherited the lead on lap nine after race leader Daryn Pittman got into the back of a slower car and spun to a stop. Gravel survived a multitude of restarts and held off Jason Johnson and Donny Schatz to score his career-best 17th win of the season for CJB Motorsports at the Fulton Speedway Saturday night in conjunction with NAPA Auto Parts Super DIRT Week.

Daryn Pittman muscled his way from fourth to second in his heat race, setting him up perfectly for the Craftsman Club Dash inversion of four. Pittman outdueled Jac Haudenschild in an entertaining Dash to earn the pole of the 25-lap Feature.

At the drop of the Green, Pittman and fellow front row starter Jason Johnson preferred the bottom line, while David Gravel was banging down the cushion. Pittman had a healthy lead when he reached lapped traffic before disaster struck. Clyde Knipp was trying to pull off the racing surface, got on the brakes and Pittman hit the back of the Knipp and spun to a stop in front of the field off of turn four with eight laps complete. Pittman went to the work area and re-joined the field while Knipp called it a night.

Gravel assumed the lead and battled hard with Johnson on the ensuing restart as Donny Schatz maneuvered his way from his eighth-starting position to third. Another caution flag flew on lap 11 with Scott Kreutter, Parker Price-Miller and Paige Polyak, who qualified for her first ever Craftsman Club Dash earlier in the night, stopped in turn four.

Gravel continued to show the way on restarts and utilized the entire racing surface searching for the fastest way around.

A pair of yellows on lap 21 and 24 gave Johnson and the rest of the field chances to steal the win, to no avail as Gravel took the checkered flag nearly a second in front of Johnson and Schatz.

“I ran just about every line you could run tonight,” the driver of the CJB Motorsports No.5 said with a smile.

Jason Johnson was pleased with his team’s runner-up efforts. “We gave it our best shot tonight. I did my best to race clean and hard and finishing between [Gravel and Schatz] is an accomplishment in itself,” Johnson said.

Donny Schatz, who extended his points lead, said, “We battled the best we could. That’s what you have to do to win a championship.

The World of Outlaws Craftsman Sprint Car Series returns to action next Saturday at the Port Royal Speedway for one final date with the Pennsylvania Posse before returning to New York for a pair of rain date events at the Weedsport Speedway and Ransomville Speedway Sunday and Monday October 15 and 16, respectively. Information on all three of these events are available on the World of Outlaws website.