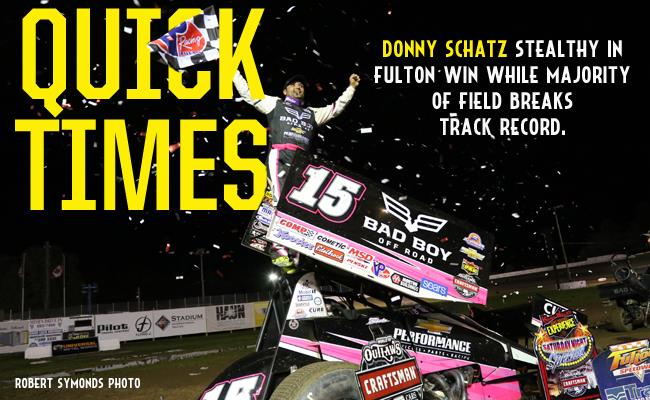 “I can’t say enough about this race, and the color pink has been awesome,” said Schatz, who recorded his second win this season with his Breast Cancer Awareness themed racecar. “It’s for a good cause, but I’m happy to find a lucky color for me.”

The series made its cameo appearance during Upstate New York’s prestigious 45th running of the NAPA Auto Parts Super DIRT Week. The Outlaws shared the spotlight with the Super DIRTcar Series, which competed in the “Win and You’re In” portion of the program that decided the final spot for Sunday’s famed Bud Light 200. Though the stakes were high for the Big-Block Modified class, the winged-sprints made history at Fulton’s 3/8-mile dirt oval.

The last time the Outlaws visited Fulton in 2014, David Gravel set the track record for 410-sprints with a lap time of 13.711. With wet conditions starting off the day, drivers found the silver lining. In qualifying, 28 of the 32 drivers broke Gravel’s record. Eight drivers recorded sub-12 second lap times. Gravel, who ultimately finished 10th in the feature, said the moist track was different than when he initially set the record.

“All the rain [Fulton] got put a lot of moisture into the track, and it made the track really fast,” said Gravel, who also broke his own record with a 13.298 in qualifying. “But we qualified badly. We dug ourselves a hole, and we had to overcome some adversity today.”

The record went to Logan Schuchart, who recorded the night’s quick time with a 12.803-second run. This was the first time in track history a sub-13 lap time had ever been recorded. After the qualifying session, Schuchart stood in front of the timing and scoring monitor in disbelief. He owed the record time to the track conditions.

Schatz kept the momentum going thereafter. He placed second in his heat race to advance to the dash draw. With an eight spot inversion, Schatz started the Craftsman Club® Dash in the lead spot. Using the momentum he has gained throughout the season, the Fargo, N.D. native won the dash and led the 24-car feature into the green flag.

“That was big, to be able to pull that eight,” Schatz said. “We had a really good car in the dash, and I kind of throttled back on my guys from making the normal changes. I didn’t feel as good as I probably would have liked, but you just never know what to expect with all the rain. The racetrack was really fast, and the top seemed like the best place to be. I did my best to get around [the track]. There were some really good cars behind us, and that’s a good thing to have behind you.”

Within the first lap, Schatz was challenged by Pennsylvania wheelman Danny Dietrich, who momentarily took the lead until the race’s first caution regrouped the field. On the restart, Dietrich opened-up a 0.800-second lead. Schatz, slow on the draw, found himself in a battle with Lucas Wolfe for second.

“Donny had a heck of a car, and we thought we were going to beat him,” Dietrich said. “We gave him a run for his money but to run like we did on a track like this, we’re happy with that.”

Wolfe overtook Schatz in turn four of the fifth lap, but a near-caution in turn four gave Schatz an opportunity to make-up the spread. A car in front of the leaders overshot the turn four cushion, slowing down Dietrich and Wolfe. Schatz took advantage of their misfortune and reclaimed the top spot. He never looked back.

“It was good to come here and be somewhat competitive,” Wolfe said. “I was good on the restarts and through the middle, but once we got dirtied-up a little bit, we never had the chance to challenge [Schatz]. He got better and better while I was just hanging on.”

Schatz, increased his 0.214-second lead at the halfway mark to a 2.441-second cushion with three laps remaining. Schatz held on for the checkers, while Wolfe and Dietrich rounded-out the podium. Schatz’s last series win at the track came on July 25, 2006.

“Thank you fans for sticking with it,” Schatz said. “The camaraderie with the fans was just great. Also, the track people. Obviously it was not the best of conditions, but it hardly ever is anymore. We just enjoyed it the best we could.”