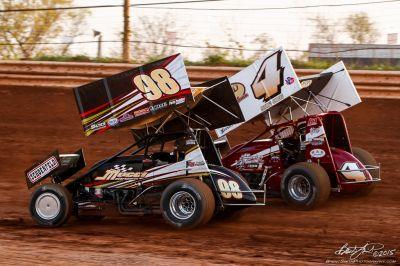 Inside Line Promotions – CONNEAUT, Ohio (June 2, 2015) – Joe Trenca earned his second top-five finish of the season last Friday, but he was oh so close to capturing his first career sprint car victory with Mucci Motorsports.

“I made a big late-race mistake trying to make one more last move on the leader,” he said. “We ran second the whole night. The guy leading had an unbelievable car. I had a run on him at the end and tried going to the cushion in turns three and four. I just went in too hot trying to get that first win and I overshot it a little bit.”

Trenca ended with a fifth-place result during the Patriot Sprint Tour event at Raceway 7.

“Second would have been better than fifth, but I was going for the win,” he said. “We had a top-three car all night. We are really hitting something with these slick tracks and it’s showing. Another top five gives us a lot of momentum.”

The night opened with Trenca finishing where he started – second – in a heat race, which earned him enough points to advance into the feature redraw. He then pulled the No. 1 to garner the pole for the main event.

“I fell to second on the start and we were probably a straightaway behind around Lap 15,” he said. “The leader got into traffic and we really gained on him. Then we had a red flag around Lap 18. Soon after the restart I saw my opportunity and just drove it a little too hard.”

Saturday’s race at Mercer Raceway Park in Mercer, Pa., was rained out.

Trenca will return to Patriot Sprint Tour competition this weekend as he makes his debut at Ransomville Speedway in Ransomville, N.Y., on Friday before competing at Fulton Speedway in Fulton, N.Y., on Saturday.

Trenca will have t-shirts and hoodies available for sale online and at his race trailer throughout the season. Visit http://www.JoeTrencaRacing.com for more information.

“Doug Schoenfeld and my grandfather have known each other for a really long time,” Trenca said. “Doug has been a huge supporter and is a really good sponsor.”

Trenca is seeking additional marketing partners to get more experience by traveling and taking advantage of opportunities in the 410ci sprint car ranks. To learn more about options to team up with Mucci Motorsports, call Joe at 315-481-6080.