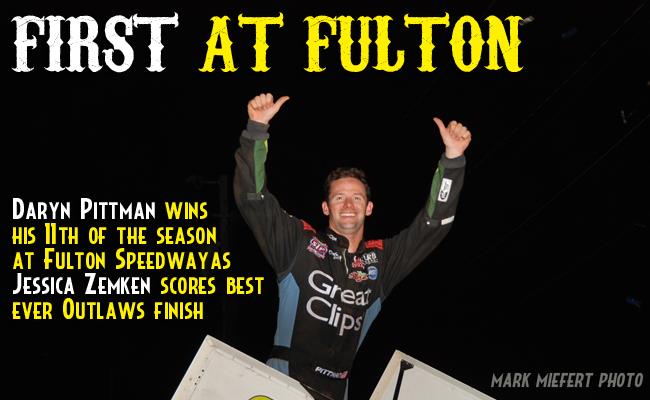 Pittman, who sits just 55 points out of the championship lead, said the win was the most uncomfortable he has had this season.

"I just knew we were going to get smoked," Pittman said in victory lane. "I honestly thought we were going to go from the lead to fourth or fifth in a lap. I just didn't know what to do. I was lost as a driver. The pace of the race just changed dramatically there."

Pittman said as he approached lapped traffic in his Great Clips #9, he noticed the cars were getting away from him.

"When I started running the bottom all the way around, I started making really bad laps in three and four on the bottom," he said. "I just kept waiting for somebody to show me their nose… It's an uncomfortable feeling as a driver when you're doing the wrong thing on the racetrack and you just don't know what to do. I was looking for the checkered about five laps before that and luckily it was just enough."

Pittman credited his crew chief Kale Kahne for making substantial changes after his dash win to give him the car he needed at the end of the feature.

"It's like a win for us," she said. "To come here with the budget we have and the equipment that we have and be able to be here and be competitive with these guys - it's just awesome."

Zemken, who won her heat race earlier in the night and started the A main in sixth, said her experience at the track helped her understand how the surface would change throughout the night. She said she knew the bottom would be good later after the middle and top went away.

After losing her brakes with four to go, Zemken said she figured her night would be over.

"As soon as the brakes went to floor, I said this is what always happens," she said. "We have a good car, something bad's going to happen… They held up just enough to slow me down to be able to catch the bottom. And when I came up on Schatz I got underneath him a couple of times and I didn't even realize Saldana was a lapped car. I've got to say, that's the first time that I've been able to come around and lap Joey Saldana. I stuck behind him a little bit. I'll take third."

After winning the dash, Pittman started on the front row with David Gravel. As Pittman jumped out to an early lead, Gravel had his hands full with Cody Darrah. The two battled through the opening laps but Donny Schatz looked to take advantage in his STP/Armor All car. He got around Darrah by lap 10, as Gravel maintained the second position.

Farther back, Zemken was making her push forward, getting around Kraig Kinser in the fifth position and then taking the fourth spot from Darrah.

With less than 10 to go, Schatz got around Gravel for the second spot and set his sights on Pittman. As the A main entered its final laps and Pittman battled through lapped traffic, Schatz took one last look at Pittman.

Pittman took the checkered flag in first with Schatz second, Zemken in third, and after a drag race down the front stretch, Gravel in fourth and Darrah in fifth.

Schatz said he worked all night trying to find the right line on the track. He said he wished his team had been able to make a few more changes.

The race for the championship remains tight between Pittman and Schatz. 55 points separate the two just past the halfway point of the season.

The World of Outlaws STP Sprint Car Series crosses the border on Saturday for the start of a three race swing through Canada. Autodrome Drummond in Drummondville, Que., hosts the Outlaws on Saturday, July 26. The Outlaws then make stops at Cornwall Motor Speedway in Cornwall, Ont., on Sunday, July 27 and Ohswheken Speedway in Ohswheken, Ont., on Tuesday, July 29.

FULTON SPEEDWAY NOTES: Following his win, Daryn Pittman is 55 points out the championship lead… Donny Schatz, Jason Sides and Jessica Zemken all won their heat races at Fulton… David Gravel scored his sixth quick time of the season - the third most of any driver… Larry Wight was the KSE Hard Charger of the night, advancing five positions to finish in ninth.